Demon disguised as a Classic S'more

So far appearing since "Kiloto the Minoto"
Smore, labeled The Polite Trickster, is one of the two interns of the second reboot of Object Terror, and the presumed antagonist for that era of the show.

It is unknown what Smore looks like under his disguise.

When disguised, Smore is seemingly an anthropomorphized classic s'more. His graham crackers are peach, his marshmallow is a greyish-tan, and his chocolate bar is brown.

Unlike the other staff members of Object Terror, Smore is shown to be antagonistic, though hiding it until he plans to capture the soul of an official Object Terror contestant.

Smore hides his true identity as a demon by disguising himself as a s'more and having a friendly persona. He, on the outside, is a very nice character, who often rhymes and, as Printer thought, is an old vegan.

Smore's actual personality is somewhat shrouded in mystery in chapter 1 of "Kiloto the Minoto," but he reveals in his diary that he came from hell to steal the souls of OT contestants. In chapter 2, he did this by using some sort of tube to collect the soul of a person. This can affect the affected persons personality (ex.: When Mint had his soul stolen, he started to use words he never used before (yes, even curse words) as well as no longer being foolish).

While in disguise form, Smore doesn't seem to have any powers or abilities. However, he does own many tube-like devices on the shelves of his base. These said devices use shocks to squire souls in the form of a liquid.

An early asset for Smore.

A beta version of Smore in the first OT5 teaser. 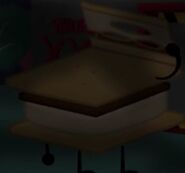 Wait, that's actually a disguise?
Add a photo to this gallery
Characters
Retrieved from "https://terrapediaot.fandom.com/wiki/Smore?oldid=3369"
Community content is available under CC-BY-SA unless otherwise noted.