In his debut, Beer appeared to be a green glass bottle with no cap and no visible liquid. The liquid substance in him is brown despite his green color. He design was later refined in Airport Donuts with a green bottle like his previous design, but he appears to have lime green liquid inside him (though this could be because of his bottle color, and the liquid may still be brown). He has a paper tag with "Beer" written in green on it going around his body, and a green bottle cap.

Once the show was rebooted a second time, Beer's design was changed to a brown bottle with no paper tag and a yellow bottle cap. The liquid inside him also changed to brown. His outline was thinner in earlier episodes, however.

As of episode 7, you can now see his shine & he gained a shade.

Like Trowel, Beer is known to be mischievous and a bully to Arch. What sets him apart, however, is his intelligence and the fact that he's slightly more friendly, despite not interacting much with other characters. As revealed in chapter two of "Kiloto the Minoto," he is a homosexual. 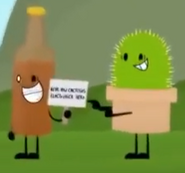 Beer and Cactus as they appear in the Becky Bucket pilot.